March is Women’s History Month which commemorates and encourages the study, observance, 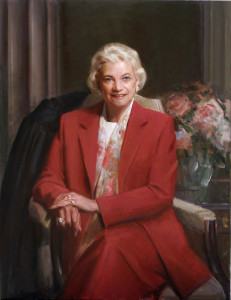 and celebration of the vital role of women in American history.

In celebration of Women’s History Month, the Ross-Blakley Law Library will have a recurring series of social media posts dedicated to the women who helped shape the state of our legal system.

If you have not already, please visit the Ross-Blakley Law Library LibGuide, Sandra Day O’Conner: Her Life and Legacy, which gives her a far more robust treatment than we could manage in a single blog post.

Roots
Born in El Paso, Texas Sandra Day O’Connor grew up on a 198,000-acre ranch called the “Lazy B” in South East Arizona near Duncan, Arizona.  The ranch did not have running water nor electricity and was nine miles from the nearest paved road.  When she was six years old she was sent to El Paso to live with her maternal grandmother. Schooling options near the ranch were limited for a young woman. O’Connor attended Radford School for Girls and then graduated from Austin High School. She did return to the life on the cattle ranch during the breaks. She learned to brand cattle at the age of eight.

Academic Excellence
Sandra Day O’Connor was a gifted student with a tenacious spirit.  At the age of 16, she began her college career at Stanford University. In 1950 she graduated magna cum laude with a B.A. in Economics.   She then attended Stanford law school where she served on Stanford Law Review with later colleague Supreme Court Justice William Rehnquist. She completed law school in just two years as opposed to the usual three. In 1952 she graduated from Stanford law ranked third in her class. To give some context, Harvard didn’t even accept women applicants until 1950. This remains the only law school class to produce two Supreme Court Justices in the same year.

Legal Career
Finding a legal job in the 1950’s was not easy for women and O’Connor, despite her flawless credentials, was no exception.  While her male peers like Justice Rehnquist went to clerk for judges or work for large law firms, she found that none of the large California firms would hire a woman. She began her legal career working for the county attorney of San Mateo for free, after turning down a paid position as a legal secretary. Having proved herself as an asset, she got a job as the deputy county attorney.

In 1954, O’Connor left California to work in Frankfurt, Germany as a civilian attorney for the Quartermaster Masker Center, a site abroad for the U.S. Army Quartermaster Corps, while her husband served mandatory military service. After his service was complete, the couple returned to Phoenix, Arizona. While her husband took a good job in corporate law with a prominent firm, O’Connor opened up her own private practice with one other lawyer. In 1965, she began working as the Assistant Attorney General for Arizona. In 1969 the Governor of Arizona appointed her to fill a vacancy in the Arizona senate – she ran for the position and won it the subsequent year.  Three years later she became the state senate’s first female majority leader. In fact, she was the first female majority leader in any state senate

In 1975 Justice O’Connor was given her first set of robes when she was elected to the Arizona State Superior Court.  In 1979 she was appointed to the Arizona Court of Appeals by the governor of Arizona where she presided until she was nominated for the United States Supreme Court in 1981 by President Ronald Reagan.

While on the SCOTUS, she authored a number of opinions on a wide range of issues.  She was frequently the swing vote and received the respect of both political parties for ability to compromise on tough issues.

Justice O’Connor’s meteoric rise and brilliant career are a testament to a woman who, despite roadblocks and closed doors, achieved a seat on the Supreme Court of the United States. She is a prolific author, has received countless awards and honors including the U.S. Presidential Medal of Freedom.  In later life she created the non-profit, iCivics, which promotes civics education to students so they might become active citizens.

Courageously, on October 23, 2018, Sandra Day O’Connor announced in a letter that she is in the early stages of what is likely Alzheimer’s disease and is retiring from public life.

A generous gift to the law school from the O’Connor estate has allowed the Law Library to come into possession of a great number of books from Justice O’Connor’s personal collection.  We are currently in the process of organizing these items for display in the 5th floor reading room.  We have received everything from inscribed books to artifacts from her desk at the Supreme Court.  Look forward to future announcements about this fascinating collection.