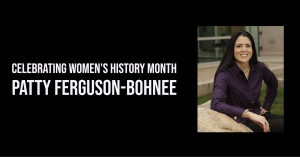 Professor Patty Ferguson-Bohnee is a clinical professor of law, the faculty director of the Indian Legal Program, and the director of the Indian Legal Clinic at ASU. She has become well known for empowering her students to make a difference in Native American communities. One of the most important ways has been expanding voting rights. As we celebrate Women’s History Month and one hundred years of women’s suffrage through the Nineteenth Amendment, the Professor notes that many women and men in tribes still face obstacles in America’s democracy.

Professor Ferguson-Bohnee, a recent recipient of the American Bar Association’s Spirit of Excellence Award, has been leading the Indian Legal Program at the Sandra Day O’Connor College of Law for several years. She notes that her field is particularly important in the state where she teaches.

“Arizona has twenty-two tribes that cover twenty-seven percent of its land. It’s important for anyone practicing law to be aware of it,” she says.

The Ross-Blakley Law Library has a sizable collection of resources for students interested in exploring Native American law and related fields. Our Indian Law library guide provides resources on tribal law, with particular emphasis on Arizona tribes, along with details on federal Indian law, treaties, and cultural resources. We also provide subject-specific guides on issues including Indian Gaming and Indian Energy. We also have an extensive print collection of Indian law resources located near the circulation desk on the third floor of the law school, near the Study Skills section.

With her encouragement, students have made significant impacts. Recently, law students Shayla Bowles and Rellani Ogumoro helped coastal tribes in Louisiana, along with a tribe in Alaska, file a complaint to persuade the United Nations to force action on climate change in the face of resistance to such efforts in the United States. They allege inaction on climate change has harmed coastal tribes who are seeing land disappear due to climate change, including failures to protect the tribes’ rights to life and adequate living standards, cultural heritage, self-determination, food security, and water security.

Her students have become increasingly involved in helping tribes and their members protect their rights. Many students have participated in Arizona Native Vote Election Project that Professor Ferguson-Bohnee started to help eliminate obstacles to voting and to uncover evidence of potential vote suppression. And her Native American Pipeline to Law Initiative has helped bring more interested in the field into law school and the legal profession. Students have also worked directly with local governments, encouraging Maricopa County officials to better protect tribal interests.

Professor Ferguson-Bohnee notes many research opportunities for students interested in exploring tribal law and federal Indian law. Indian gaming law and tribal self-governance law have been gaining additional support at the law school. Different tribal legal and social customs are ripe for scholarly attention, such as the culture of peacemaking that tribes such as the Navajo engage in to settle disputes without litigation, which could provide lessons for any students interested in alternative dispute resolution. Students may also wish to explore the science of implicit bias and its role in the marginalization of minority voices.

Professor Ferguson-Bohnee’s research has focused on Native American election law and environmental law issues. In a piece for the Arizona State Law Journal titled The History of Indian Voting Rights in Arizona: Overcoming Decades of Voter Suppression, she examined the history of obstacles that Arizona tribes have faced in making their voices heard, and proposed solutions to continuing difficulties. She has also examined the impact of a key piece of civil rights legislation in The Struggle for Equal Voting Rights: 45 Years of the Voting Rights Act, noting a sharp increase in minority voter registration and the impact the law has had on elections. In the environmental sphere, she sounded an alarm years before her students helped tribes bring action regarding disappearing coastal land in Louisiana in The Impacts of Coastal Erosion on Tribal Cultural Heritage. In it, she calls for vulnerable tribal historic sites to be listed on the National Register of Historic Places to help preserve them and for the federal government to do more to protect tribes it has so far failed to recognize.

If you’d like to help by researching the legal issues affecting Native American communities, please schedule an appointment with a librarian. We have the experience to help you find all you will need, including the most helpful information from familiar resources such as commercial legal databases as well as critical subject-specific information from resources less familiar to law students.