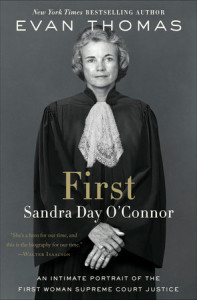 storian Evan Thomas describes how Ronald Reagan, who nominated Sandra Day O’Connor to the Supreme Court as the first female justice, characterized her as “a person for all seasons.” Thomas’ biography of O’Connor fleshes this description out, chronicling O’Connor’s childhood on an Arizona ranch, her time as a student at Stanford University and Stanford Law School (which included a marriage proposal from fellow student and future Supreme Court Justice William Rehnquist), the years she worked as a legislator then as a judge in Arizona, and her groundbreaking role on the Supreme Court. First also provides intimate glimpses in to O’Connor’s private life, including her marriage with John O’Connor and her relationships with her fellow Justices (the civil but cold relationship with Justice Antonin Scalia is amusingly illustrated via the description of a tense doubles tennis match). The book also delves in to O’Connor’s anguish over her cancer diagnosis in the late 80’s and sorrow over the dementia diagnosis in 2018.

First is full of insightful entries from O’Connor’s journals, her late husband’s private memoirs, and excerpts from letters to family, friends, and colleagues. It also contains engaging interviews with O’Connor herself, as well as former classmates, romantic interests, colleagues, and law clerks. Through these unique and private materials we are shown a three-dimensional portrait of O’Connor.

Thomas has written a biography of O’Connor that is distinctive in material and scope. It is an engaging history of a singular woman. We highly recommend it.