This post if from the Cleveland-Marshshall College of Law Library blog.  Hat tip to Tom Hurray for some interesting Thanksgiving trivia.  Hope you have a Happy Thanksgiving.

Did you know that cranberry sauce was invented by a lawyer? In 1912, Marcus Ur 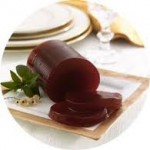 ann, a cranberry grower and lawyer, developed a recipe for jellied cranberry sauce that could be preserved in tin cans. He did so because he did not like to see all the extra cranberries go to waste after the holiday season was over. He later coined the phrase “ocean spray”, and co-founded the company of the same name. Since he was also such an expert promoter and producer, he was dubbed the “Cranberry King”. Click here to read a short history of Ocean Spray, from the Encyclopedia of Consumer brands.  As you enjoy your cranberry sauce out of a can this Thanksgiving, or as you drink a refreshing cranberry juice cocktail, be thankful to a lawyer for making such a lasting contribution to the Thanksgiving holiday.