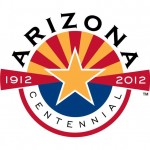 Arizona’s Centennial is coming up on February 14th, and the state is celebrating in a big way.  Want to get in on the party? Consider attending one of these events in Phoenix, and check out the many other official events listed on the Arizona Centennial website:

Centennial Ride on February 11th
This motorcycle ride to the Arizona Capital will be led by country star, and Arizona native, Dierks Bentley.

Arizona Best Fest on February 11th and 12th
The Best Fest is an outdoor festival which will be held on the Capital Mall,
featuring entertainment, food, music, arts & crafts, and more.

Centennial Marriage Event on February 14th
The Office of the Clerk of the Superior Court is offering couples the chance to be
married on the grounds of the Wesley Bolin Plaza by Arizona Supreme Court
Chief Justice Rebecca White Berch on Valentine’s Day.

Fandango!Arizona on February 14th
This black tie gala will take place at the Phoenix Convention Center and will
feature, among other famous guests, Sandra Day O’Connor.

With mortgage and forclosure issues in the news every day, there’s no doubt that plenty of Arizona homeowners are in need of help. The College of Law has had a busy week lending a hand.

The question before the court is whether homeowners can challenge the foreclosing party’s authority to sell their house. Robertson will address issues related to the practical problems that result when homeowners are denied their right to challenge illegal foreclosures in court.

Ever wondered where the term “rainmaker” came from? Or the origins of “blackmail”?  A new book in the library collection explains how many of the legal terms that we use everyday developed.

For those of you familiar with the rules of evidence, this entry may be of interest:

Separate entries in Lawtalk for each legal expression offer interesting and surprising aspects of the word’s evolution.  The authors also address urban myths and common misconceptions, and lightheaded sidebars on many entries offer jokes and comic historical material.

Hat tip to The Faculty Lounge

The Law Library has added some new professional responsibility materials to the collection.

Both books are on reserve at the Law Library circulation desk and can be checked out for use in the library.

Exam season may seem like the far-off future now, but it is precisely what you are doing at the beginning of the semester that will prepare you for exams at the end.  The new semester means a fresh start, and now is the time to get your study practices off on the right foot.  Here are some techniques to help:

For more thoughts on how to get your semester started off well, read Amy L. Jarmon’s ABA Student Lawyer article titled “Exam Review Begins Now” on the ABA Student Division website (requires sign-in).  Larson offers some excellent techniques for improving your exam results in May.  Look at the “Thinking About the Review Process” post on the Law School Academic Support Blog as well.  This post is a little old, but its information on the four kinds of review that students need to accomplish throughout the semester to be prepared for exams is still useful.

The Library of Congress has released a free app for the Congressional Record. From the iTunes description:

The app will let you access the Congressional Record from January 4, 1995 (the 104th Congress, 1st Session) through present day.

You may have noticed the internet “strike” being waged today against the Stop Online Piracy Act (SOPA) and the Protect IP Act (PIPA) when you tried to access a Wikipedia article and saw the page go dark, or logged on to Google and noticed the protest link on its home page.  Both Wikipedia and Google, as well as other websites such as Reddit, BoingBoing, Mozilla, and WordPress are voicing their opposition to these two bills by participating in an “internet blackout.”  A full list of strike participants is available at SOPAStrike.com

SOPA and PIPA are aimed at preventing copyright infringement and intellectual property theft, and would give the Department of Justice the power to prosecute foreign websites committing or facilitating IP theft.  The DOJ could also force U.S. companies, including internet service providers and credit card companies, to cut ties with those websites.

Those opposing the two bills argue that SOPA and PIPA would censor the web and that they will hurt the economy because American businesses with websites will have to monitor everything users upload or link to, or face expensive and time-consuming litigation.   Additionally, opponents say that the bills won’t even achieve their stated purpose of stopping piracy.  They claim that pirate sites will just move to other addresses and continue their illegal activities.

The library is open from 8 am to midnight on Martin Luther King Day. Come and study, that you might make yourself and the world better with your knowledge.

“Human progress is neither automatic nor inevitable… Every step toward the goal of justice requires sacrifice, suffering, and struggle; the tireless exertions and passionate concern of dedicated individuals.”
― Martin Luther King Jr.