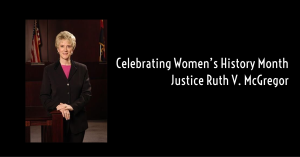 Justice Ruth Van Roekel McGregor was among the most successful students at Arizona State University’s College of Law in a time of significant gender disparity in the legal profession. She became a judicial star in her own right and supported the rise of one of the profession’s greatest trailblazing women.

In 1981, Justice McGregor became one of the first clerks for the Supreme Court justice who would become the College’s namesake, Sandra Day O’Connor. Although most law clerks are recent law school graduates and she had a lucrative career at the private law firm Fennemore Craig, Justice McGregor brought additional experience to support the first woman to serve on the nation’s highest court.

There, Justice McGregor galvanized her legacy of support for gender equality. One of the other Supreme Court clerks with whom she served, Deborah Jones Merritt, reflected in the Arizona State Law Journal that Justice McGregor worked on the influential case Mississippi University for Women v. Hogan. That case forced MUW to stop discriminating against men in its nursing program.

She would continue her life of public service, working her way through the Arizona court system to become Chief Justice of the Arizona Supreme Court in her final term before her retirement in 2009. In addition to her service to Arizona jurisprudence, through her professional associations she served legal education and supported the advancement of women in the legal profession as a member of the Board of the National Association of Women Judges.

As a student, she co-wrote a comment with Margaret Rhys Tinsley titled Juries and Jurors in Maricopa County, analyzing statistics to determine how well the Arizona county that includes Phoenix was adhering to the constitutional requirement that juries be representative of the community. The authors noted that women might have been overrepresented because they were less likely to be employed at that time. However, they concluded that despite clear underrepresentation of the young adults and older people as well as the economically and educationally disadvantaged that Maricopa County was largely fulfilling its obligation.

Justice McGregor went on to write several articles for law reviews and journals during her career, including a piece in the Syracuse Law Review analyzing whether the merit selection system of judge selection in states including Arizona adequately preserved judicial independence. She also explored the evolution of legal education toward a more outcome-based model and measured the educational benefits and drawbacks of the Socratic method and practical legal clinic work in the Phoenix Law Review. She also returned to the Arizona State Law Journal to provide updates on developments in Arizona constitutional jurisprudence, highlighting the judiciary’s ultimate goal of shaping a body of law that accurately and objectively interprets the state constitution.

She also wrote several pieces, including one published in the Harvard Law Review, praising her boss at the Supreme Court, Justice O’Connor, for her trailblazing and her support of the advancement of women in the legal profession. Justice McGregor hailed Justice O’Connor’s accessibility and her outreach to young girls to help them see their own potential. Through her work for the judiciary and legal education, Justice McGregor has provided a shining example of success and service in Arizona.

If you have an interest in examining the legal issues underlying topics such as gender equality and the court system, the reference librarians at ASU’s law library have research expertise to get you started. Meet with a Librarian to discuss your ideas in person or online.