If you’ve been around this summer, you’ve undoubtedly noticed some construction going on around the building.

As part of this construction, starting Monday, the large mound of rocks to the South of the Law Library will be dismantled to make way for a service road (don’t worry, the area adjacent to the Reserve Reading Room will still be nicely landscaped). This project will also fix drainage problems around the building and at the McAllister/Lemon intersection (crossing the street to get to the Rural Road parking structure after a monsoon will no longer require a grand jeté over lake that forms!).

As we bit adieu to our dear “Magic Mountain,” we thought we’d pay tribute by sharing its story.

Magic Mountain was not in the original plans for the building and was a happy accident. When the site for the Law Library was excavated to lay the foundation for the building, the dirt was piled up here. Ironically, the original building plan called for a service road through the area, but when that idea was nixed, the pile of dirt was covered with rock, peppered with Saguaros and turned into a landscape feature. It was mockingly dubbed “magic mountain” by law students, who disliked it (now we use that as a term of endearment!).

Law students were not the only ones unhappy with it in the beginning. An undergraduate student journalist’s State Press opinion column titled “Law Library Just Plain Ugly Building”  (Oct. 19, 1993) said:

This waste of space may have been put there for a purpose, but it looks like a mistake. It seems as if the construction company did not have any place to haul the dirt that remained after the dig so they put a bunch of expensive sandstone and saguaro on it to make it look like a work only the finest sculptor could create. They failed.

The article criticized the rest of the building as well, and incited a firestorm of newspaper articles responding to it.

In 2000, Magic Mountain was awarded an “Onion” by the Phoenix Business Journal (click here to read the article).

Love it or hate it, layers of this “onion” will be peeled away in the coming weeks. Magic Mountain has kept watch over the Reserve Reading Room for the past two decades. It has seen countless numbers of hard-working law students, has been a happy home to many ground squirrels (who have been safely relocated), and has even been climbed by naked people…twice (that we know of).

Whoever thought a pile of dirt and rocks would have such a colorful history?

While the seats are packed, it’s pretty quiet here in the Law Library, as students are taking full advantage of the Reading Period to prepare for final exams.

Law students have long taken refuge in the library for quiet study. Before 1993, the ASU Law Library was housed in the basement and other areas of Armstrong Hall. Without a free-standing building with dedicated study rooms (which, by the way, are in high demand this time of year – reservations are recommended!), students hunkered down at study carrells or nooks and crannies throughout the space.

To commemorate this Reading Period, we thought you’d enjoy these photos of hard-working law student of yore (c.1970s). Hang in there, students, soon final exams will be a thing of the past! 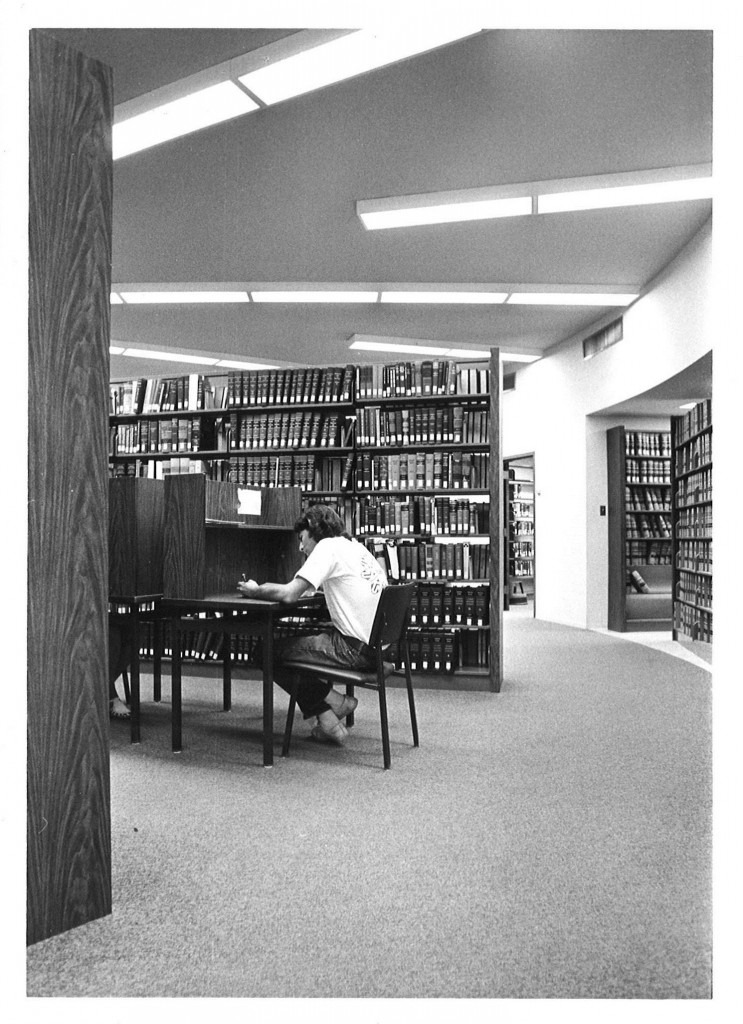 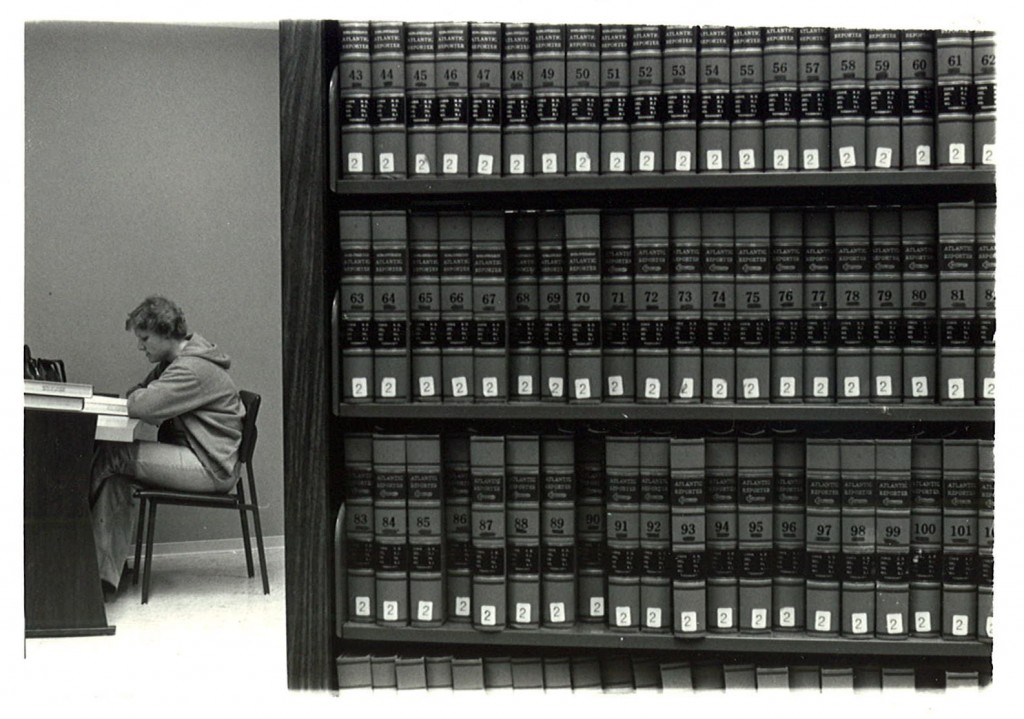 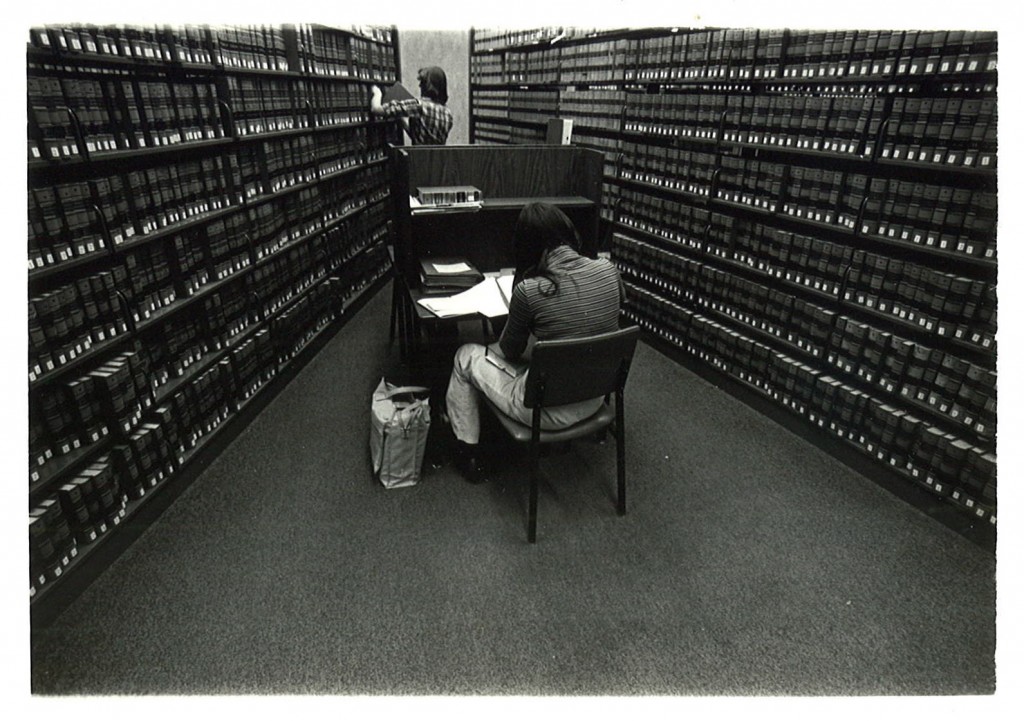 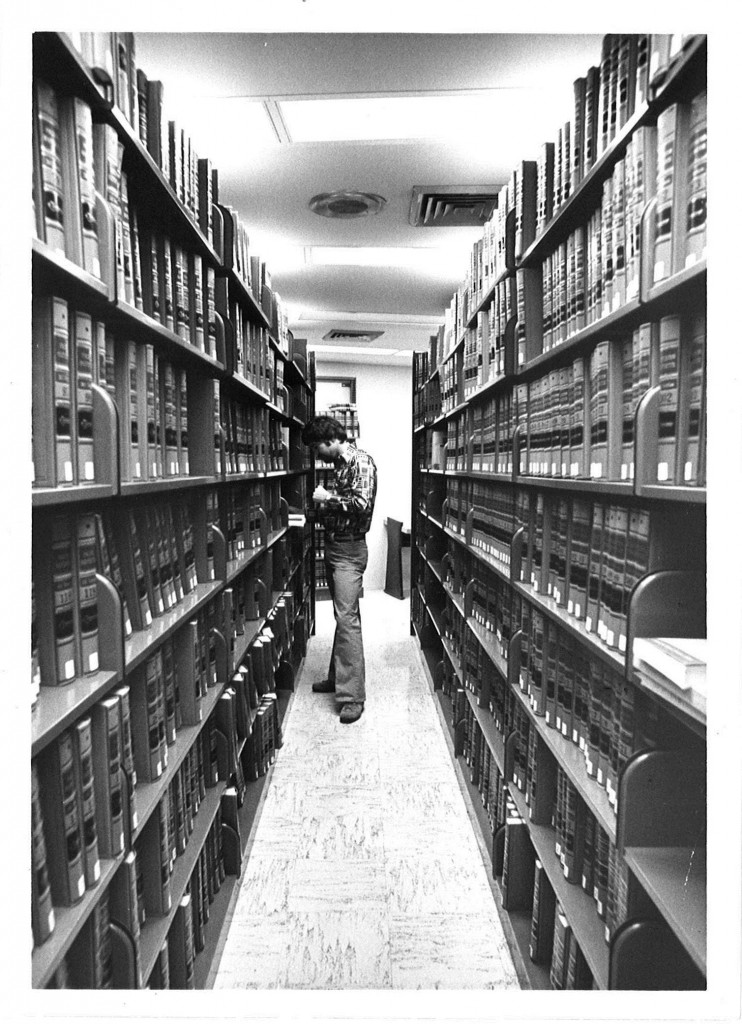 While searching the College of Law Archives for items to include in Professor Feller’s upcoming memorial service, I came across a gem in the Spring 1989 Forum (a former periodic publication of the College of Law): The Commencement Address, given by Paul F. Eckstein, to the graduating class of 1988.

How to Find Happiness in the Practice of Law:

1. “(A)lways be respectful of those who are your adversaries and understand that your role as an advocate or negotiator deles not require you to assume the demeanor of those you represent…

2. (Do) what you can do well and (take) care with each word that you write and with each thought that you put forth…

3. (S)eek out and master new areas of the practice, however foreign and intimidating they may at first appear to be…

4. (M)ake the time to read great novels, listen to fine music, keep a watchful eye for new architecture and above all to develop a deep appreciation of our history and of our governmental institutions…

5. As a fifth key to happiness – indeed survival – in the practice of law you must be prepared to resign your position or fire your client, however painful that may be, when you are asked to participate in or bless unjustifiable conduct…

6. Perhaps I have an old-fashioned sense of values, but I cannot imagine how one can ever be truly happy in the practice when he is more concerned with the quantity of his possessions than the quality of his service. Thus, the sixth key to happiness is constant attention to the quality of your work.”

To read the Commencement Address in its entirety, click here.

The All Night Study Room will be unavailable tomorrow night.

We apologize for the inconvenience. We will reopen at 7:00 a.m. Friday morning.

Hopefully you signed up early to attend Thursday’s book-signing event for Justice Sandra Day O’Connor’s book reading and signing event for her new book Out of Order: Stories from the History of the Supreme Court. This event is now sold out; Out of Order is out of tickets!

If you’ll miss the event, you can check out the book from the Law Library’s collection or purchase it from event co-host Changing Hands Bookstore or other retailers. We also found this recent NPR interview with Justice O’Connor about the book (39 min). 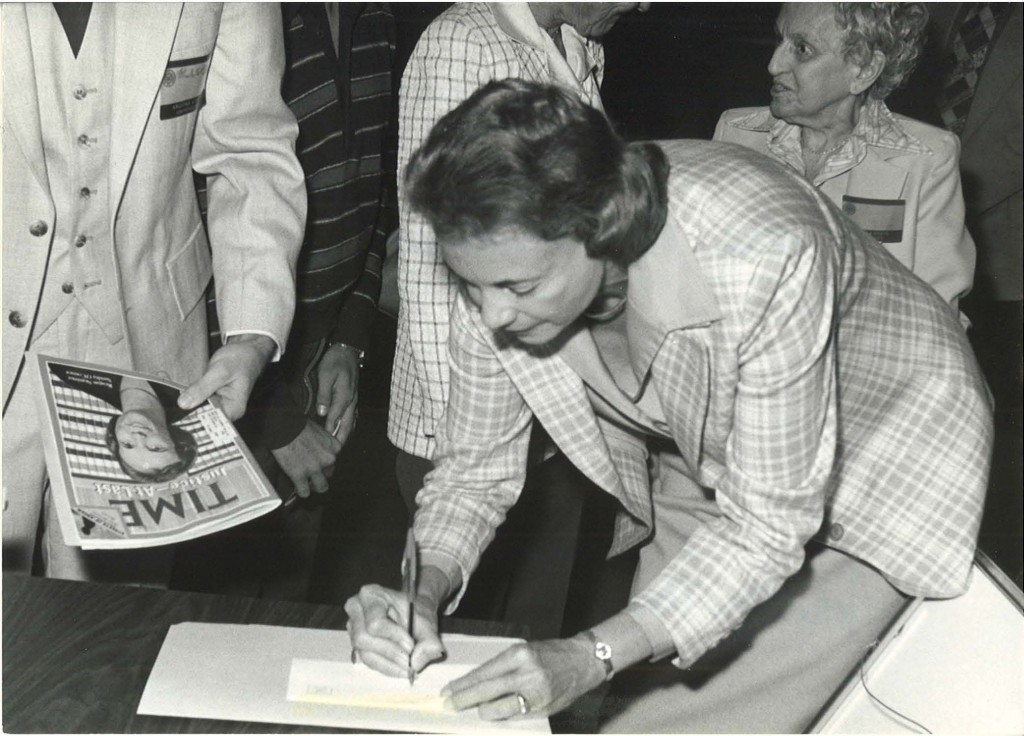 Ever wish there was a study room on the first floor so you would be close to the Core materials and Reference Librarians? Well, now there is!

Thanks to some creative repurposing of space and furniture by our staff, the Law Library is proud to bring you our newest 4-person study room. 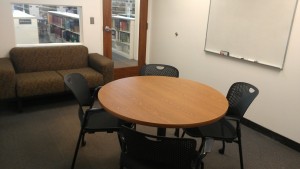 Room 112D is located just past the Reference Librarians’ offices. Like all our study rooms, it is goverend by theStudy Room Code of Conduct and Guidelines, and it can be reserved online up to a week in advance.

The West Elevator of the Law Library (the only one that goes to the 3rd floor) is currently out of order. It will be out of commission until tomorrow (Tuesday). We apologize for the inconvenience!

We know a few Law Library staffers who will be skipping the Stairmaster at the gym tonight!

Ayn Rand is famous for novels The Fountainhead and Atlas Shrugged, but have you heard of her play, Night of January 16th? This courtroom drama, enlists audience members to play the “jury,” and has different endings depending on which verdict they reach.

In 2011, Hofstra University cast real lawyers for  a run of the play, and hosted post-performance legal discussions.

The law has long been a topic of interest to writers and audiences. If you’re interested in learning more about the law in literature, the Law Library has several items in our collection to help get you started.

We know that the tradition of Thanksgiving has been celebrated since colonial days. But do you know how it became a Federal Holiday?
The first post-nationhood  proclamation on record was made by George Washington on October 3, 1789. This marked the first time that Thanksgiving was officially recognized by the U.S. Government.
After that, Thanksgiving was proclaimed by presidents sporadically until Abraham Lincoln took office; since then it has been an annual affair. Lincoln proclaimed it in 1861, and after that the holiday was observed annually on the final Thursday in November.
In 1939, Franklin D. Roosevelt, proclaimed Thanksgiving a week earlier, in an effort to kick start the holiday shopping season and give the country, which was in the midst of the Great Depression, an economic a boost.

Some states disagreed with this decision and decided to stick with celebrating Thanksgiving on the final Thursday, Nov. 30; while others observed the Nov. 23 celebration, which became  known colloquially as “Franksgiving.”

To end any confusion caused by Thanksgiving presidential proclaimations, Congress passed a joint resolution on October 6, 1941, that Thanksgiving would be observed on the fourth Thursday of November. Roosevelt signed the bill into law on December 25, 1941, thereby making Thanksgiving a matter of federal law.

You can learn more about Thanksgiving Day’s political journey from the Franklin D. Roosevelt Presidential Library and Museum and the Library of Congress Thanksgiving Timeline. 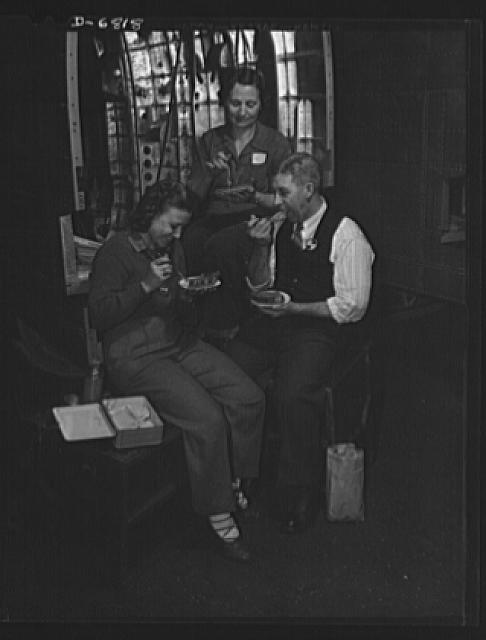 Next week during Fall Break, part of the first floor of the Law Library will be under construction.

As a result, access to the main restrooms on the first floor (near the foyer) will be blocked.

There are additional restrooms on the second and third floors of the Law Library. There is also a unisex restroom in the All Night Study Room (122).

We apologize for the inconvenience. We hope this construction will  provide some much-needed enhancement to the building.