If you’re missing the legalese you’ve been learning but enjoying Christmas nevertheless, check out this retelling of “‘Twas the Night Before Christmas” from the “Law is Cool” blog.

During Intersession (December 15 – January 7), the Law Library hours are:

Have a great break!

The Law Library has a slew of bar exam preparation materials available for those taking the upcoming February Arizona Bar Exam.  We know that your studying is probably well underway, so be sure to check out some of the following study materials:

Materials in the Study Skills Collection

Finally, in case you need a break from studying, some bar exam humor:

Last night we had a little excitement in the vicinity of the Law Library, and police advised everyone to stay indoors until things settled down.  Fortunately no one was harmed.

During this situation, the ASU Alert System sent out important updates to keep us apprised.

While these kinds of events are rare, it never hurts to be informed. So we want to take this opportunity to remind you of some safety resources. 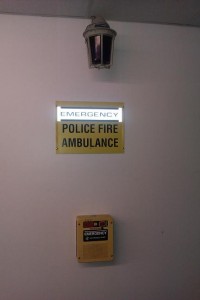 Today is the last day of exams! Because you probably have not done much pleasure reading for the last five months, this semester’s final installment of the New Book Series features a book you may enjoy reading over winter break.

In his new memoir, Justice John Paul Stevens reminisces about his tenure on the U.S. Supreme Court, and his experiences with five chief justices.  Justice Stevens opens with a brief discussion of the twelve chief justices who came before him, and then transitions to speaking about the five most recent chief justices.  The first is Fred Vinson, who Stevens interacted with while he was a law clerk to Justice Wiley Rutledge.  The second is Earl Warren, who Stevens argued before during his only Supreme Court appearance as an attorney.  Warren Burger is the third – he was the chief justice when Stevens joined the Court as an associate justice.  Next is William Rehnquist, who was a contemporary colleague of Stevens’ before he was elevated to chief justice.  The final chief justice with whom Stevens worked is the current one, Justice John Roberts.

Justice Stevens provides fascinating pieces of information about himself and the Supreme Court throughout his memoir.  His discussion of the chief justices shows how Supreme Court processes have changed (such as how oral argument time has been reduced from one hour to 30 minutes), sheds light on various time periods of his life (law clerk, attorney in private practice, and justice for the Seventh Circuit Court of Appeals), and gives insight into multiple landmark cases.  Some of the most interesting portions of the book come when Justice Stevens discusses his vote to uphold the death penalty, a vote he wishes he could take back, and speaks about his time as the senior associate Justice, a post he refers to as the “second among equals.”

Overall, Five Chiefs: A Supreme Court Memoir is a great read, one that displays Justice Steven’s wit well, and offers a glimpse of what life is really like as a Supreme Court justice.

Did you know that the Law Library has a number of research guides and portals on its webpage?  These guides and portals are meant to help individuals researching specific areas of law find the materials they need.  They provide both explanation of subject matter and direction for locating resources.   The guides and portals may be particularly useful to you as you research for a paper or prepare materials for your externship or summer job.

Library research guides cover Arizona-specific subjects, such as state legislative history and Arizona public records, as well as federal subjects, including  federal bills and proposed legislation and the U.S. Supreme Court. There are also many topical research guides – bankruptcy, foreclosure, immigration, and tax law are just a few.  The Library has three research portals in addition to its many guides – Biotechnology and Genomics, Indian Law, and International Law.  The portals provide a centralized location for accessing in-depth resources.

Be sure to consult these resources when taking on legal research in the future!

We know you are really busy studying right now but why not take a break this weekend and pick up few cans of food for the Law Library’s donation drive for the Arizona Animal Welfare League.  You can click below to read an earlier post about the donation drive.

Thank you for your generosity!

Don’t forget that CALI lessons are a free way to help you prepare for exams.

Please note that you must register to use CALI lessons on the Web. Registration will allow you to create your own password to use the lessons. In order to register, you will need an authorization code. The code can be found in the Law Library’s CALI Guide.  You will need to login to this page using your ASURITE ID and password.

We love animals here at the Law Library, and thus were very excited when we heard about Puppy Day at George Mason University School of Law.

Yesterday, Forever-Home Rescue Foundation volunteers brought four litters of recently-rescued puppies to George Mason for stressed-out law students to play with and enjoy.  The puppies’ visit came the week before exams, and provided a welcome study break for students.

Read more about Puppy Day at the Wall Street Journal Law Blog.  A brief video featuring some adorable puppies and more photos of the event are available at this Washington Post website.

We hope that you too can enjoy the therapeutic company of a four-legged friend before finals start!